Home – Vír and its neighbourhood – Vír ice climbing wall
Since 2006, Vír has had a unique ice climbing wall. It was first opened by the Matuška brothers in the caravan site on the hill, and, in 2008, under Adrex.cz, they moved it to a more attractive locality on the right bank of the Svratka river, near water reservoir Vír I. 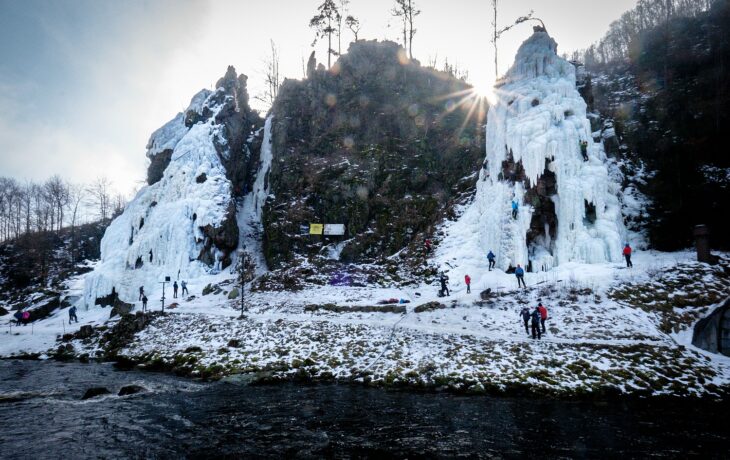 In 2012, organization Ledová stěna Vír (Vír Ice Climbing Wall) was founded, which has been maintaining and managing this sport site since then.

The highest icefall in the Czech Republic

The ice wall in Vír is the highest icefall in the Czech Republic and the highest artificial ice-formed structure in Europe. Depending on the weather, none, one or both rocky towers (Velká věž and Malá věž) opposite the former factory become all ice. Their height is around 45 metres. The length of the climbing routes is between 15 and 25 metres. For security reasons, climbing the upper sections of the wall is only allowed to experienced climbers out of public opening hours. Artificial lighting allows evening and night climbing.