Home – Test centre
The idea of an independent and truly objective ice climbing gear test is as old as the project of an artificial ice climbing wall. That one we opened for public in 2006 in a caravan site near the village of Vír. Since 2008, when it was moved to a more attractive locality, it has become a phenomenon in the Czech Republic. With hundreds of ice wall climbers from various places in the Czech Republic, a variety of gear have been coming, covering the whole range from the product made by top global manufacturers to home-made items. Ice axes, crampons, ice screws, impregnated ropes, and so on. 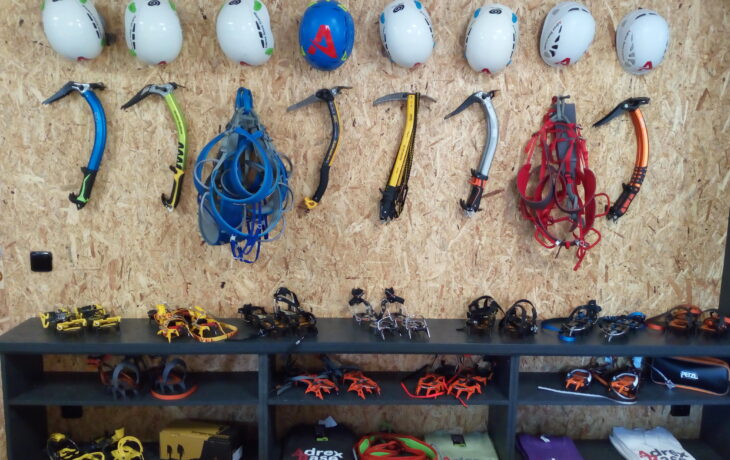 In all-night chats, geometry, balancing, used materials, availability, and prices were compared and fervently discussed. As the full gear is quite costly, it is worth knowing where and how to get the equipment, which parameters one seeks and what suits you best. And this is where the business plan regarding building a test centre came from.

However, furnishing a test centre is much more difficult than starting an ordinary rental shop. With a rental place, it is enough to start cooperation with a single manufacturer or supplier. Yet not every producer desires to have their products shown next to competition company’s products, with non-censored and publicly available rating and feedback from customers. In that time, the price for independence and unbiased approach was simply too high.

It took us nearly ten years to prepare everything for our think-big project. In June, 2018, we finally managed to open our long-time dreamt-of Adrex Base Camp, a base camp providing testing of Czech small-scale business mountain bikes, and rental of equipment for whitewater activities and Via Ferrata climbing, which are all activities that can be done in Vír and its neighbourhood.

For biking, there are tracks of various difficulty, and trails are to be built soon. Since October 2018, we have been collecting ice axes and crampons from all global manufacturers. One of our pros is the fact that we buy all the equipment, and therefore we are absolutely unbiased. This makes Vír become the largest and best-equipped ice climbing test centre in Europe, where you can not only try how each product feels, but in good weather also try it on our ice wall.

The test center is still evolving, you can currently test products of these brands here: