Home – Vír and its neighbourhood – Via ferrata
In 2015, two Via Ferrata routes were opened for public. Via Ferrata are climbing routes secured with fixed steel cables and iron rungs and pegs which allow even medium-skilled mountain tourists access rocks which are normally difficult or even impossible to hike and climb. 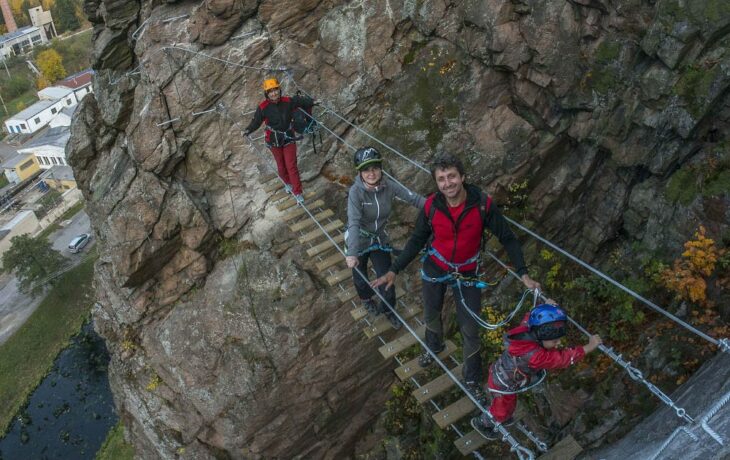 As popularity of Via Ferrata climbing has been rising lately, the routes in the neighbourhood of Vír can provide an interesting terrain profile for getting first experience or organization of climbing courses for beginners. The difficulty of the secured routes is between B and C, which means from moderately difficult to difficult, while the descent route involves only a forest path.

Via Ferrata on the Ice Wall

The first Via Ferrata route in Vír is introduced with a rock staircase winding across the slope from chalet Krabička to the eastern wall of Velká věž. The fixed steel cable will be on your left, taking you first through the eastern and later to the northern wall to the proximity of the summit of Velká věž, which is passed around, to bring you to a five metres long rope bridge. This part is followed by a steep ascent to a lookout, where the cable is interrupted. However, it continues about five metres further and leads you to Blueberry ridge until the place where the rocky ridge changes into a slope and the Via Ferrata route ends.

From there you can take a hiking path to the dam of water reservoir Vír I, and further to the starting point of the Via Ferrata route at Jezerní stěna. The descent route goes through the slope from the southern part of ridge Blueberry, to the eastern wall of Velká věž, and back to chalet Krabička. The upper section of the descent route has not been finished yet, so it is necessary to be careful at this point.

Via Ferrata route at Jezerní stěna

The second Via Ferrata route in Vír starts in the bend below the dam of water reservoir Vír I. The entrance ladder on the north-western wall is well visible, and the fixed steel cable taking you through the route is placed on the left as well. While ascending, you have a wonderful view of the dam of water reservoir Vír I behind your back, one you do not want to miss. In the midst, the route comes to the southwestern wall and through it goes on to summit, which provides another breath-taking view of the dam. From the end of the cable, you cross the slope until you reach the forest. There you can take a path to get back down to the road between the parking place and the route entrance, or you can continue hiking towards the Klubačice outlook and then to the village of Vír.